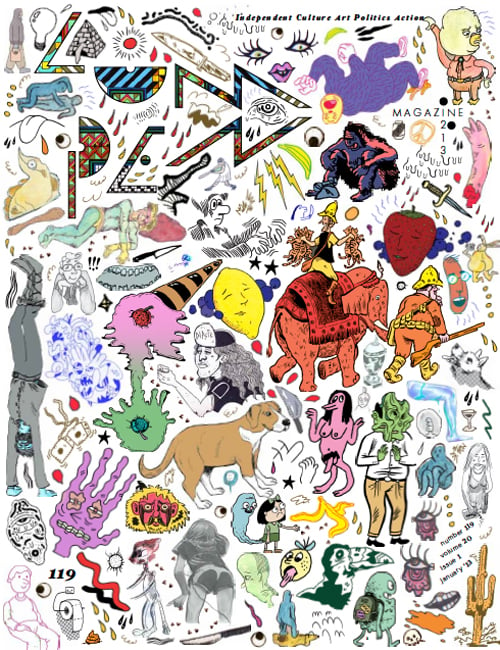 Since 2009 I have been in charge of wrangling art for the comics section of Lumpen magazine. The process is relatively simple; I ask artists whose work i think either interesting or downright crazy to contribute a piece that approaches the medium of comics with a distinct personal consideration and after a few shuffled deadlines and a few hundred e-mails, Voilá! The section was originally just a few pages of comics then proceeded to expand to around 10 to 15 pages and in the previous issue into full color. Most of the pieces are merely 1 or 2 pages, which also affects how I decide on what work to include as it is an interesting because it eliminates the need to turn the page. As the section got bigger and better I could easily envision filling an entire issue with comic art which is how we get here.

Most of the contributors reside in Chicago, which is currently going through a bizarre kind of comics renaissance. Chicago has always had a rich history as being home to many comics artists, from the early shapers of the medium through newspaper comics, was a major center of output during the underground era, and is called home by many well known contemporary artists such as Ivan Brunetti and Chris Ware, who along with former residents Jessica Abel, Archer Prewitt, and others made up the last “all comics” issue of Lumpen from 1996.

Currently, Chicago is a hotbed of amazing talented and industrious comic artists, as well as artists working in other mediums whose process utilizes techniques that are tangentially related to comics. Many of the artists in this issue are also printmakers, writers, curators, musicians, designers, painters, animators, teachers, and performers. There are cartoons in our art shows, comics in our museum exhibitions, and this year will mark the 2nd annual Chicago Alternative Comics Expo (CAKE), the first of which was a great success, as well as the 2nd year of our own performative comics night entitled Brain Frame. An interview with the founder of which is included in this issue. Reception to the comics work published in Lumpen has been overwhelmingly positive, and for that I would like to thank all of the artists and contributors in this issue.